skip to main | skip to sidebar

No. 6 runs for office 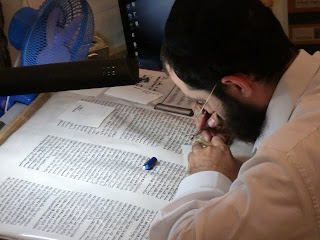 In the Prisoner episode Chimes of Big Ben, the magisterial Leo McKern plays No. 2. The theme of this episode is not so fascinating to me right now as a discussion No. 2 and No. 6 have while sparring with wits.

No. 2 “Yes, I’m glad you approve. Someday the world, the whole world as the village, what do you say to that?”

Here it is. The Global Village, a term coined by those illustrious globalists like Hillary Clinton, Al Gore and even George Bush Sr. with his “New World Order.” We live in the age of the police state. The dystopia of Phillip Dick is real and surrounds us.

The Patriot act, the “Main Core”, camera’s on every street corner, GPS monitoring of citizens, tracking of gasoline sales, tracking and divulgence of banking records…

Everything we do is monitored; we are like fish in a bowl. Surveys, questionnaires, and billing… Where does it end?

You want to live on the moon?

What about the missing? Every week the news networks have some pathetic story, “the dead babe of the week.” Another beautiful woman is missing or murdered. Many thousands are going missing every year. What about them? Where do they go? Does our government do anything with this tech to stop child predators? No! Has the white slave trade stopped? No.

There is a profit to be made.

The war on drugs? The CIA sells weapons to the drug cartels. The DEA equips the counter drug agencies of various countries. A huge economy persists on the endless war on drugs. Why does the American public tolerate this?

American schools? They propagandize and that is about it. High school graduates can barely read and write these days. Don’t try to tell me this is not the truth. New military members testing on the ASVAB are scoring record lows. The ASVAB has not changed in years. The school system is failing us and it is becoming a national security concern. The only thing children learn in public school is consumerism and conformity!

Does this sound like the ranting of a madman?! Be seeing you. 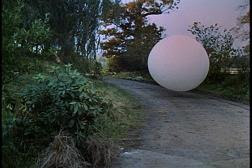 In episode one Arrival No. 6 is given an "electro-pass" to foil Rover and escape in a helicopter. Of course it was a set up and No. 2 was in control of the helicopter the whole time. So the electronic device that was a talisman of freedom becomes another shackle.

Today I received the following:

"Location based advertising is already here and starting to happen. The ability to target consumers based on their locale will have an significant effect on the way that companies advertise, not just in the mobile medium, but will also impact on their entire advertising strategies and channels.

The technology is nearly here to enable you to offer these services. In fact, subscribers are increasingly using their handsets as mapping and navigation tools, and this coupled with the spread of mobile advertising, internet and search applications has created an exciting revenue opportunity.

Location Based Advertising will offer sponsors the chance to get customers to the door, with easy instructions and mapping. It will offer subscribers the ability to arrive in an unknown town or city, and be able to look up where their favorite, trusted brand of coffee shop, or restaurant, petrol or cinema is located, in direct relation to where they are at the time. Getting lost never offered such promotional opportunities before!!!"

Well thats just too bloody convenient. Naturally the technology works two ways. The marketers, cops, your ex-husband, the NSA can find you as well. "Oh," the companies say "we don't track people, we track hand sets." Sure you do, thats a fine semantic difference. So if I want I can plug my wifes cell phone number into a web-site and for a nominal fee I can track her (phone) anywhere in the United States. Is this really a good idea?

I don't feel like being bombarded with advertising everywhere I go.

I don't wish to be tracked BY ANYONE when I go anywhere.

When I try to get away, I am trying to get away from IT ALL! What don't these people understand?

Global information systems, are a large part of what I do in life. The ability to pull down information on any region or slice thereof and understand what is there. How many police stations, hospitals, armories. . . Soon the people will be integrated into the large government GIS systems. Any individual will be traceable by their electronic signature, a footprint they cannot shake.

Do you trust the globalists with this kind of power?

Posted by jleastes at 1:23 PM No comments: 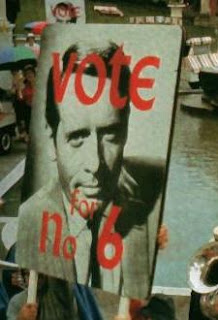 In the Prisoner episode Free For All No. Six decides to run for office. Of course the entire affair is a convoluted plot by No. 2 to get No. 6 to reveal why he resigned. McGoohan was obviously making a statement about the democratic process. No. 6 was to run against No. 2 for the position of No. 2. A ugly campaign commenced including media lies, vapid promises and insipid campaign speeches. When No. 6 got out of line the warders of the Village drugged him and brainwashed him into the perfect candidate. Finally No. 6 wins the election. Do the villagers welcome him as a liberator? Of course not, now that he is No. 2 he is the enemy. No. 6 desperately tries to use the system to release everyone and make for a mass escape... but not a single villager listens to him. At this point No. 6's campaign assistant takes power from him by force and assumes the role of No. 2.

This episode pretty much sums up my view of politics. There is no point. I vote out of conscience and a sense of civic duty, but it is my assumption that the globalists simple maintain whoever they want in power. Despite the divisiveness you see in American politics the two sides are virtually identical. They are loose with our tax money, they take tremendous liberties against the people, they ignore the constitution, they promulgate socialist dogma, and they attack family values. The Republican Party did nothing for conservative values voters despite sweeping victories. The DNC regularly lets down it's own constituents. Both parties are fiscally irresponsible to the point of criminality.

Whats it all about?

This blog is half fan site for the hit TV series "The Prisoner" starring Patrick McGoohan; and half political commentary site. I am a long time fan of the sci-fi series and McGoohan's show Danger Man. I am also very concerned with many trends in world, US, and local politics (and religion). Feel free to gripe.

Map of your village

Can I get a larger map?